Support Koinonia Today as We Prepare to Thrive! 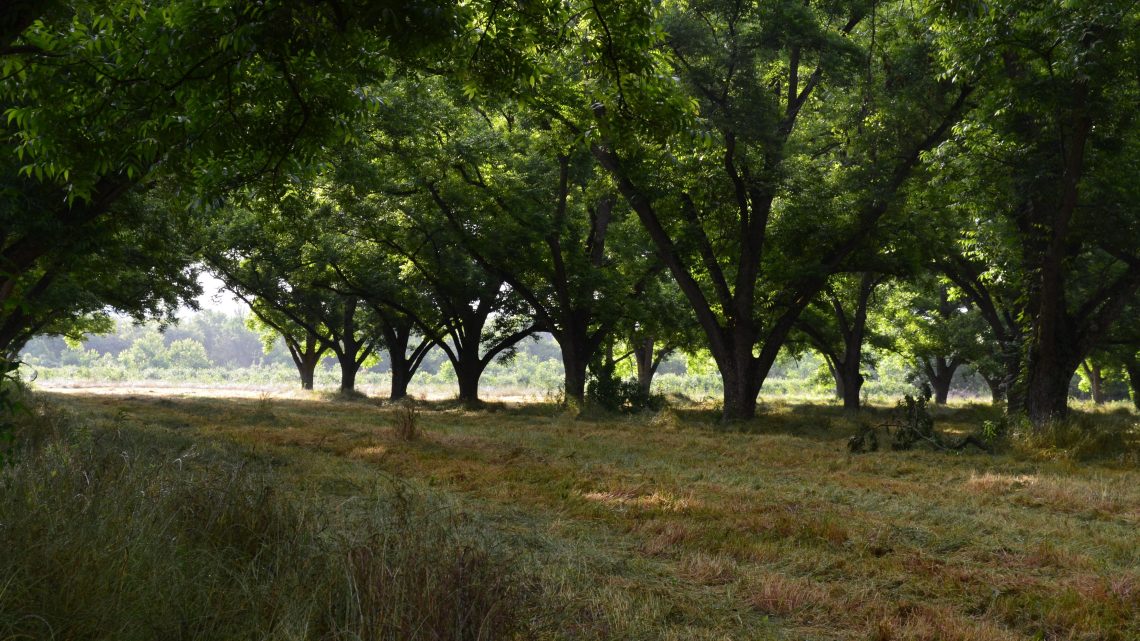 If you have come into contact with or read a word we’ve written since January, you’d be hard pressed not to know that Koinonia has declared 2019 the Year of the Pecan. We are planting 40 acres of new pecan trees — 800 trees of different varieties!

As soon as we decided to do this, we began giving extra attention to the soil in those 40 acres. Koinonia is all about the soil — everywhere on the farm, but, especially, where we’re growing food. Joel Salatin, a farmer and author I highly recommend, writes in The Marvelous Pigness of Pigs —

…soil is a pulsing, thriving community. Our cupped handful [of soil] contains more beings than there are people on the face of the earth… soil is a teeming community of beings… Now we know through work at Stanford that these microscopic beings (nemtodes, mycorrihizae, giberrellins to name a few] communicate. They actually have a language and respond to each other. Page 51

Does it not make sense that to produce healthy food, you need healthy, living soil from which it grows? For our pecans to have the best, most marvelous pecaness of pecans, we (and our animals, too) must work to help infuse life into the soil.

Koinonia has received a great deal of derision for its commitment to soil biology. There is a fungus in our part of Georgia we call scab and it, along with a whole myriad of other pests, will destroy a pecan crop unless you spray heavy doses of fungicide, insecticide and herbicide. We have been told over and over again, “Spray, spray, spray!” Those “cides” do mostly kill the pests, but they also kill those microscopic beings that bring life. And after you spray them, you can’t allow humans or animals to go for a stroll in the orchards for 72 hours.

Does it make sense to eat food doused with poison and grown in dead soil? Wouldn’t we rather eat food from plants that are healthy and thriving all the way from the soil in which they are planted to their highest leaf?  Koinonia must live its values and we know too much about what is happening to this earth to not focus on healthy soil. We are sticking to the biological method no matter the names not fit to print we are called. I like these words from Joel Salatin, too —

I would suggest that a God-honoring farm is one that shows strength rather than weakness. … It’s one that has healthy plants and animals. It’s one that develops food that develops healthier people. This is not a health-and-wealth message. It is ultimately a humility-and-dependency message. God’s designs work. Page 68

So, we are planting 800 new trees and we are looking to get every last one of them a sponsor. If you haven’t already, I am asking you to sponsor a tree or two or three or a whole row. There is a lot of work to do. We could use your help to get it done. Find out more on our website.

I’ll end with these words from Clarence Jordan. Can it be said any better?

… we went there and bought that old, run-down eroded piece of land. It was sick. There were gashes in it. It was sore and bleeding. I don’t know whether you’ve walked out over a piece of ground and it could almost cry out to you and say, ‘Heal me, heal me!’ I don’t know whether you feel the closeness to the soil that I do. But when you fill in those old gullies and terrace the fields and you begin to feel the springiness of the sod beneath your feet and you begin to feel that old land come to life and when you walk through a pine forest that you set out in little seedlings and now you see them reaching for the sky and hear the wind through them… Men say to you, ‘Why don’t you sell it and move away?’…they might as well ask you, “Why don’t you sell your mother?’ Somehow God has made us out of this old soil, and we go back to it, and we never lose its claim on us. It isn’t a simple matter to leave it.”

No, Clarence, like you, we aren’t about to sell this land or leave it. And the only thing we are going to spray on her is life.

For those of you reading this, thanks for your support. It is needed.

Bren oversees our life and work by keeping us focused on the community’s vision and mission. She facilitates the internship program and guides novices and candidates.

Koinonia Grow – December in the Garden