One day after lunch, Con shared a childhood experience that influenced his future pacifism. “One day as a boy I was out playing with other kids, and we decided we would play war. So everybody started loading up their wagons with stones and sticks and other weapons. I decided to make mine into a tank. I went into the house and told my mother, ‘We’re playing war, and I’m going to make my wagon into a tank.’ She looked at me and said [pause], ‘Well… if that’s what you’re going to do, you’d better do it.’ So I went out to the tool shed and sawed the handles off a few of my dad’s shovels, so I could use them as guns. 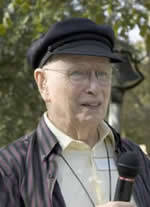 “In a few minutes, my mother came out. She was carrying some white sheets and red fabric. She covered my wagon, like a Conestoga wagon, and with the fabric made a big red cross. ‘Now you are an ambulance,’ she said, and suggested I not saw off the handles of any more of my dad’s tools [laughter]. I ran back out to the kids and pulled my medical wagon in, and within a few minutes everybody wanted to have an ambulance! How quickly we can change from seeking to destroy lives to seeking to save them. And it took only one ambulance to do it.”

Mostly, though, Con shared what life was like for him and his family while they lived at Koinonia from 1949-1963. A pacifist, he found Koinonia a wonderful place to raise children, even though by night they were threatened with bullets and threatening phone calls, and by day harassed as they went to the all-white public schools. But at home they could run free, take dips in the pond, listen to Clarence tell spell-binding stories, and be themselves in a very loving and faithful community. Con also shared many stories of what it was like to farm, work and live here, of historical incidents and interesting visitors, and of the reason behind Koinonia. In his own words, rearranged by topic:

On the formation of Koinonia

“We were a group of people trying to live the spirit of the early church. The four commitments that people joining Koinonia would make were:

“We built all the houses ourselves, as best we could, but we were dumb about house-building. The mansion house burned after catching fire because the chick brooders were leaking kerosene… We had to schedule our showers at the beginning, because at first, there was only one bathroom. 18 of us shared that bathroom!

“We decided that any adult member of the community had the right to discipline a child right away [so you didn’t have to wait for the child’s parent].

“We did pay taxes. We felt that churches ought to be taxed like anybody for their property.”

“Clarence’s brother George, who was proud of him in retrospect, and was a lawyer and a Unitarian, said something about committing Clarence to a mental hospital [when Clarence started preparing to open Koinonia]. You see, Clarence was something of a bother to the family. They loved him dearly, but they didn’t like the trouble he brought. They felt he was out of bounds. So the family gathered and they talked for hours. They decided to commit him. But Clarence’s sister Cornelia said, “The first one of you who files that form, I’ll do the same to you too.” So they never did.

“Most people really loved Clarence. He and I were like brothers, with little to no jealousy. We were very different theologically, however. I was into process theology, where you learn as you go from your experiences, and he was more radical, into the social gospel. My dad studied with Rauschenbush, who taught about using the social gospel with the poverty issue.

“People think that Koinonia Farm was all Clarence, but there were a lot of skilled farmers here. Clarence raised chickens. Howard did row crops and irrigation, pigs and animal husbandry. We sold honey. And we were good! We were good at farming and ran a successful business. We shared flocks of chickens, graded and marketed eggs until 1960. We had between 1,000-4,000 chickens in four chicken houses. We took between 125-150 cases of eggs to market each week. We had cattle, and the bulls were gentle—it would scare the mothers, but the children would walk right under the bulls and they wouldn’t be harmed. That dairy bull was mean, though—900 pounds of hamburger and other cuts when we finally slaughtered him. And Clarence also started the grape vineyards. When he died there were two jugs of scuppernong wine under his desk.

“Clarence was probably on the road 25% of the time. People would follow him around the farm, sometimes he couldn’t get much peace. Then they would leave right before it was their time to join the community. As much as possible, Koinonia tried to return people’s property when they left.”

When asked to describe a typical day

“We’d do 5:30 am Bible study. At 6 am, we sent our trucks out to the labor pools. The going rate was $1 or $1.50 a day, but we paid about $4 a day, which annoyed the other farmers. At 10 am we’d have water and a snack. At noon Willie Pugh would drive the tractor out with lunch. We did lunch potluck-style: the woman from each family sent a dish. Then we worked until 4, when there was a gathering for everyone. We’d do different things: Quaker meeting, songs, worship. Then at 8 pm we’d have a business meeting. In the early days, everybody came to this. Nobody wanted to chair those meetings! Sometimes they weren’t very effective meetings. Visitors participated, but they had no precedent to understand and wouldn’t have to live with the consequences of the decisions. We had 8-10,000 visitors yearly. In addition, we had novices, provisional members, and full members. Eventually, visitors didn’t come to these meetings anymore.

“For fun we had game nights, picnics, and went looking for Indian artifacts along Muckaluchee Creek. Billy Wittkamper and Johnny Eustis especially were into collecting: one had four bulletin boards full of arrowheads, plus ax heads.”

When asked about the Koinonians’ search for a local home church

“After we were kicked out of Rehoboth Baptist Church for bringing P. L. Joseph, an Indian man, to the services, we tried several other churches. The Disciples of Christ feared that we’d bring blacks with us, and their building was also wooden, so they feared they’d be burned. The Presbyterian Church people wanted to get to know us better first, although we thought that it’s hard to get to know somebody if you can’t go to church with them. The Catholic church was wooden too, so again they feared they’d be burned down if Koinonians attended. And we tried three or four more before going to the Episcopal Church. “They won’t even know you’re there,” someone said. We went for about one year. They had a great priest, Paul Rich (Ridge?), but the congregation was less enthusiastic and eventually the bishop interceded. He told us it might make trouble for Paul. All along, we went to black churches, but there it was different. We were treated differently because we were white. They sat us in the choir loft and passed a special basket for us. We didn’t really get to know the black culture.

“After we got back from church on Sundays, there were often two or three alcoholics stretched out on the tables in the dining room. Two were from wealthy Americus families. This was their place to recover, and sometimes they brought their friends.”

On the boycott, bullets, & bombing years

“The KKK burned a house on the pasture by the creek. People cut fences and let our cows and pigs out. For one summer, no night passed without shots being fired nearby. We figured out that the bullets that were fired from machine guns were GI ammunition, and that that shooting was happening on National Guard night. Apparently they gave the men ammo for target practice, and they figured that this would be a good place to practice. That kind of shooting stopped once word got to Washington, DC.

“Elizabeth Morgan, a Quaker, was the woman who was with Dorothy Day (who came here several times) during her hours of “night watch.” They were sitting in an old green Plymouth parked off the road. A bullet was fired through the radiator, flew through the engine, hit the instrument panel and dropped at Dorothy’s feet.

“During the boycott, our egg market dropped to just 12 cases per week (from 125-150), and we had to send the rest to Clarence’s brother who had a Piggly Wiggly. Only some of the black families and stores would still buy our eggs. The A&P was the only big store that sold to us even through the boycott. But most wouldn’t, so our four chicken barns were soon empty buildings, and we wondered what to do with them. When I was taking eggs to a family, I found that they had a pecan plant to sell. They showed us how to run it and sold it to us, and we put it in an empty chicken barn and began cracking and sorting our own nuts. This was good because nobody nearby would help us with our pecans. We got boycotted out of the farming business. But a peace group from Cincinnati suggested we sell our peanuts and other goods through mail order, because the Post Office is a federal office, under federal protection.

“Clarence developed a fruitcake recipe, and we prepared some hams to sell. We got them all good and moldy so that they would cure. People sometimes call us up to complain that the ham was moldy and they’d thrown it away—they didn’t know about curing hams, and that inside there was the most delicious meat!

“And I was no longer an egg marketer, but a package shipper. Once I was taking mail order packages to the Railway Express office, and a man asked me what I was doing. I told him, and he took off my glasses. He had brass knuckles, and he beat me up. The guy inside the office took me to the doctor’s, and Paul Rich, the rector of the Episcopalian Church, picked me up and took me home afterwards. The sheriff arrested me for knocking my own head on the curb to attract publicity!

“When the store in town was bombed for trading with Koinonia, it rattled the county courthouse and blew out windows in the Windsor Hotel and other buildings nearby. That store was right in the center of town.

On population change at Koinonia

“During the 1960s, when Koinonia got down to the Wittkampers, Jordans and Brownes, one family had to go. We couldn’t support all three. It was decided that we [the Brownes] had the best chance of making it in the outside world, so we went.

“Then in the early 70s, the Koinonia population peaked! They were able to support many more people because the farming was OK, they had some good farmers, and the pecan industry was growing.”

“I met Peace Pilgrim twice, although I don’t remember much of what she said, and a guy traveling in a bus he’d painted with the world and some hands clasped around it. We had a lot of travelers through here.

“The black school had only about two kids during the harvest season, but as many as 80 at other times of the year. All the parents pulled their kids out to work during the busy seasons. There were no busses. The only requirement to become a teacher in one of those schools was that you had to be able to write your name. But many of those teachers were very good.”